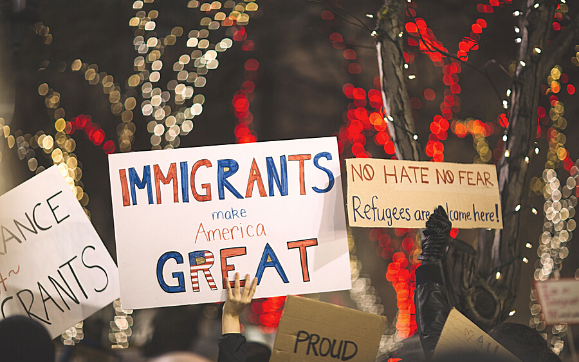 Immigrants have been in the cross hairs of this administration for the last four years. Since Donald Trump assumed office in 2017, there have been over 400 executive actions on immigration, spanning everything from issuing a Muslim ban, closing our borders, creating obstacles for those seeking to become green card holders or citizens, terminating Deferred Action for Childhood Arrivals (DACA), shutting the door to refugees, and more. The efforts not only to vilify and dehumanize immigrants, but also to dismantle and reconfigure our immigration system, reached a fever pitch in the run-up to the November election, especially in the area of federal rulemaking. In the face of such rapid-fire rulemaking, the City Bar Justice Center’s (CBJC) Immigrant Justice Project (IJP) quickly enlisted the aid of our longtime pro bono partnering law firms.

In just the last few months, the Administration released a cascade of proposed regulations that would codify policies devastating to non-citizens, particularly asylum seekers and other vulnerable immigrant populations. For example, on June 15, the Departments of Justice and Homeland Security published proposed regulations upending asylum law and procedure, rendering it impossible for the vast majority of asylum seekers to receive protection in the U.S. On August 26, the Administration published a proposed rule that would radically restructure the immigration courts, eviscerating due process in the name of supposed efficiency. And just two weeks later, on September 11, it proposed an Orwellian nightmare of a rule, one that would authorize invasive biometric data collection, including palm, voice, and iris prints, facial imaging, and DNA, from millions of immigrants, as well as their U.S. citizen and legal permanent resident relatives, at the cost of hundreds of millions in taxpayer dollars.

For each of these proposed rules, the Administration provided only a 30-day comment period. Normally, rules of such length, complexity and scope are afforded at least a 60-day comment period to allow the public a meaningful opportunity to comment, as required under the law. These 30-day periods, attached to such substantive proposals and in the midst of a global pandemic, were undoubtedly designed to overwhelm and stifle public comment.

Drawing on the firm’s experience, having successfully represented over 40 asylum seekers through CBJC, IJP Staff Attorney Caitlin Miner-Le Grand and I co-counseled with Willkie Farr and Gallagher LLP partners Richard Mancino and Shaimaa Hussein, and associates Ciara Copell, Ahmad El-Gamal and Danielle Bradley, to issue a Comment in opposition to the July 15 regulation redesigning the asylum system. We focused on the frivolous and pretermission provisions of the proposed rule to argue that they would cause irreparable harm to all asylum seekers, particularly pro se asylum applicants. They would also inhibit the ability of pro bono counsel to effectively represent asylum applicants and undercut CBJC’s pro bono model and mission. Read our Comment in Opposition here. Following a herculean effort on this “end of asylum” regulation, we co-counseled once again with Willkie to oppose the August 26 rule and its erosion of due process in immigration courts and BIA proceedings. Read our Comment in Opposition here. Before the ink on that had even dried, we pivoted to work with Dechert LLP on our Biometrics submission. Co-counseling with Dechert partner Mauricio España and counsels David Weinraub and Jay Schleppenbach, our Comment focused on the rule’s disproportionate and harmful impact on children and vulnerable communities served by CBJC, namely asylum seekers and survivors of domestic violence, trafficking and other crimes. Read our Comment in Opposition here.

Both Willkie Farr and Dechert responded without hesitation to our requests to co-counsel on these complex, time sensitive efforts–amid a pandemic no less–speaking volumes about their heart, their leadership and their commitment to immigrant rights. Each of the comments showcased not only their immediate responsiveness but also built upon the substantive knowledge gained through long term and ongoing engagement with pro bono immigration cases. Having worked with so many individual clients, both firms were ideally positioned to understand the structural issues at play.

It is likely that CBJC’s most vulnerable clients will continue to be impacted by these changes for years to come, regardless of the recent outcome of the Presidential election. It remains to be seen whether a Biden-Harris administration will have the political will and resources to implement policies that revive immigration and restore humanitarian protections. Either way, we continue to take heart knowing that CBJC’s partnering law firms, attorneys and pro bono volunteers will continue to do their utmost to defend the rights of immigrants and other vulnerable populations.