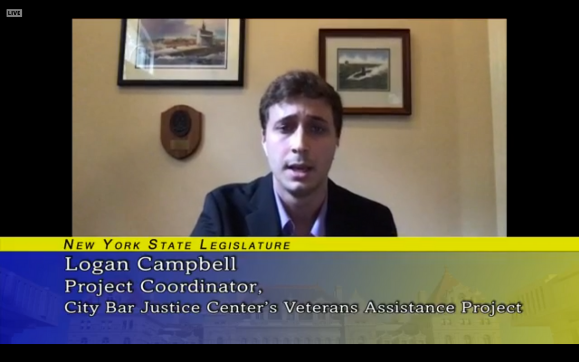 The Veterans Assistance Project (VAP) recently testified before the New York State Legislature on behalf of the City Bar Justice Center (CBJC). Logan Campbell, VAP’s Project Coordinator, spoke at the joint public hearing which focused on protecting the state’s estimated 800,000 disadvantaged veterans as they struggle amid the COVID-19 crisis. VAP advised against potential cuts in funding for veteran legal services and warned that this could create additional barriers for poor veterans living in New York City.

In his testimony, Logan shared the difficult situations VAP clients currently find themselves in to shed light on the increased challenges veterans face as they deal with the impact of the pandemic, stating:

“[The Veterans Assistance Project] has spoken with too many veterans who have lost their jobs or have had to drop out of school, too many veterans concerned about whether they will have housing next month or who have suddenly been tasked with serving as caretakers for their elderly and ailing family members. All this is in addition to managing the service-connected disabilities from which they suffer.”

During questioning, Logan pointed out that even before the pandemic, New York veterans were significantly underserved. Citing a report by the New York City Bar Association, Logan noted that less than 17% of veterans in New York are receiving VA benefits, which is short of the national average and pales in comparison to other states such as Florida, California, and Texas, where the percentage of veterans receiving these benefits is 24%, 25%, and 29%, respectively. Cuts to funding for veterans’ legal services could put New York in jeopardy of falling further behind.

To watch the full public hearing, click here and scroll to the bottom. Logan begins testifying at 05:04:22.