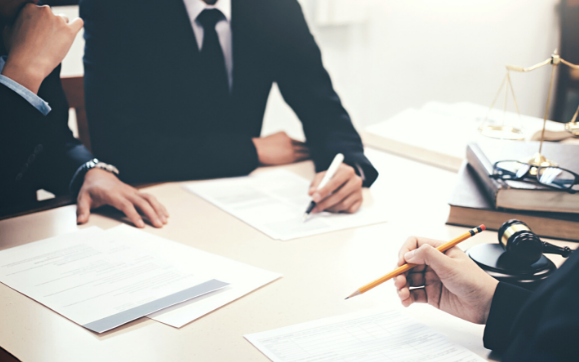 Developments on the Horizon for Immigrant Trafficking Survivors

by the Immigrant Justice Project September 28, 2021

In July 2021, the City Bar Justice Center’s Immigrant Justice Project and our co-counsel pro bono team at Kramer Levin Naftalis & Frankel LLP (Kramer Levin) won a hard-fought victory for Lucia*, a survivor of labor trafficking who had been living in the United States for over twenty years. Lucia, a transgender woman, arrived in the United States in the late 1990s after her uncle offered her a place to live. When she arrived, however, Lucia’s uncle forced her to work at a car wash for long hours every day, with her paychecks to be sent directly to him to allegedly “repay” him for bringing her to the United States. Lucia resided in a tiny basement room and was eventually kicked out of the house after intervening to protect her aunt from her uncle’s physical abuse. She was left with no money, without a home, and limited English proficiency. She became homeless and enmeshed in abusive relationships. Even after escaping those relationships and improving her living situation, Lucia continued to struggle with the long-term effects of trafficking and abuse.

In 2017, Lucia learned about and applied for T Nonimmigrant Status, also called a T-visa, through the City Bar Justice Center. The T-visa was created by Congress in 2000 to prevent, protect, and prosecute against sex and labor trafficking. Obtaining a T-visa would provide Lucia a pathway for immigration status in the United States, and an eventual green card. Like many other T-visa applicants, Lucia submitted her application after multiple years had passed since her trafficking due to her trauma, lack of knowledge and access to legal assistance, and prolonged economic insecurity. For many years, United States Citizenship and Immigration Services (“USCIS”) had routinely recognized these factors as sufficient to show that an applicant remained “physically present” in the U.S. on account of their trafficking (a statutory T-visa requirement).

An unannounced sea change in policy, however, caught Lucia’s application and USCIS denied her application. During the past four years, the Trump Administration shifted to a narrow and exacting interpretation of the “physical presence” requirement for T-visa applications. Between fiscal years 2016 and 2020, the denial rate for T-visa applications rose from approximately 15.9% to 38.5% — a 242% increase. Meanwhile, appealing a T-visa denial to the Administrative Appeals Office (AAO) is rarely successful. Of the 152 T-visa appeals disposed by the AAO between fiscal years 2017 and 2020, only 19 dispositions were favorable to the applicant – a success rate of just 12.5%.

Despite these challenges, Kramer Levin attorneys Claudia Pak, Chase Mechanick and Daniel Sugarman leapt to appeal Lucia’s denial. The team worked tirelessly with Lucia to submit her appeal to the AAO of USCIS on a tight 30-day timeframe. They filed both additional primary evidence and an eloquent legal brief explaining how the trafficking Lucia experienced at the hands of her uncle continued to bind her to the United States, and why Lucia’s presence in the United States remains essential for her to access key medical and psychological resources necessitated by the trafficking she experienced. As a result, the AAO overturned the denial, finding that Lucia’s physical presence in the United States was directly linked to the past trafficking she experienced. This was an important victory that will provide Lucia with a pathway toward stable immigration status and security.

Lucia’s recent win at the AAO, paired with other recent developments, may signal that the landscape for T-visas is finally changing. USICS is drafting updates to the policy manual to improve T-visa adjudications and reopened public comment on a 2016 Interim Rule for T Nonimmigrant Status, which would implement as final an expanded definition of key terms such as “physical presence” and several additional protections for T-visa applicants. Drawing from their experience with Lucia’s case, Kramer Levin worked with the Immigrant Justice Project to submit a public comment addressing the 2016 Interim Rule. We remain hopeful that these developments may signal a positive shift in the processing of T-visa applications, considering that CBJC’s most vulnerable clients will continue to be impacted by these changes for years to come.

*Disclaimer: Please note that pseudonyms have been used to protect the identity of CBJC program recipients and to preserve attorney-client confidentiality.