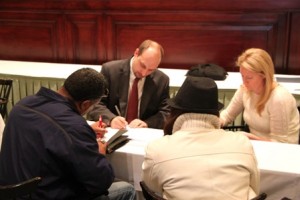 The Fund was reopened after President Obama signed into law the James Zadroga 9/11 Health and Compensation Act of 2010, reactivating the September 11th Victim Compensation Fund of 2001 that operated from 2001-2003. Sheila L. Birnbaum was appointed Special Master of the reopened Fund by the Attorney General, to provide compensation for any individual (or a personal representative of a deceased individual) who suffered physical harm or was killed as a result of the events of September 11, 2001 or the debris removal efforts that took place in the immediate aftermath.

The City Bar Justice Center thanks the following law firms and corporate in-house legal departments for their support at the first clinic:

Special recognition goes to Heidi Levine and DLA Piper (US) LLP for their involvement and support.

The next legal clinic for the reopened Victim Compensation Fund will take place at the New York City Bar Association on Tuesday, December 13, 2011 from 6:00-8:00 p.m.