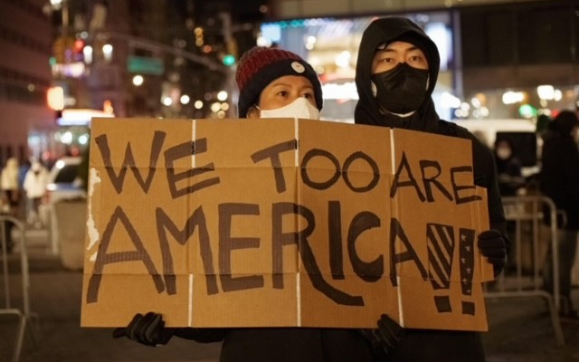 Advancing Justice for the AAPI Community

The Asian American Federation’s photo above was taken on March 19, 2021 at their “Peace Vigil for Victims of Asian Hate”.

Keun Young Bae is the WilmerHale Pickering Fellow for the Immigrant Justice Project.

“It’s because of you [expletive] Chinese people that I have to wear a mask!”

This text, received by Ms. X*, a client of the City Bar Justice Center’s Immigrant Justice Project (“IJP”), represents just one of over 6,500 reported incidents of harassment and violence that the AAPI community has faced during the past year. Months after Ms. X, an asylum seeker, left her abusive partner, he suddenly unleashed a barrage of threatening messages blaming her for allegedly “causing” the pandemic.

Asians make up the fastest-growing racial and ethnic group in the United States. Stereotyped as studious, successful, and smart, this “model minority myth” renders invisible the challenges and systemic barriers many AAPI individuals face in obtaining economic stability, educational equity, and personal safety. For many immigrants like Ms. X, these problems are further exacerbated by the lack of permanent legal status. Asians represent 16% of the 11 million undocumented immigrants in the United States, and South Korea, for example, is the sixth-largest country of origin for Deferred Action for Childhood Arrival (“DACA”) recipients.

Asian immigrants like Ms. X, who are working class or struggle with poverty, have especially borne the brunt of the economic decline, xenophobia, and violence associated with the pandemic. In New York City, Asian Americans experience some of the highest rates of poverty across all racial and ethnic groups, with an estimated 22% living in poverty. Ms. X exemplifies these struggles. She lost her restaurant job at the onset of the pandemic and has been unable to find new employment due to her limited English proficiency. The threatening texts she received from her abuser, against the backdrop of a significant increase in violence against Asians nationwide, have made her afraid to use public transportation as she seeks new employment. With her asylum application stuck for the past five years in massive immigration backlogs, Ms. X already feels like her life in the United States is in a precarious state of limbo. Her uncertain legal status has contributed to her feelings of depression and paralysis, especially when she thinks about the prospect that she may be forced to separate from her U.S. citizen son.

Ms. X’s experiences reflect those of many AAPI clients served by IJP. The intersection of racism, poverty, and lack of access to resources continues to trap AAPI immigrants in a cycle of vulnerability that is often unseen in mainstream depictions of the Asian American identity. In 2020, despite comprising 15% of New York City’s population, Asian-led and serving organizations received less than 1.5% of social service contract dollars, a level of public funding significantly disproportionate to the need within the city’s Asian communities. The needs of disadvantaged Asian immigrants remain unmet, partly due to stereotypes of Asian American success that ignore the harsh realities of many less-advantaged Asians, as well as a lack of linguistically and culturally competent service providers and sparse community funding.

Yet there are possible avenues of relief in sight. The recently proposed U.S. Citizenship Act of 2021 would bring much needed reform to our inhumane immigration system. The Act would help undocumented immigrants to overcome the hurdles they face and live with the dignity and respect they deserve. Among other measures, it would also specifically address the asylum backlog that has placed Ms. X’s legal status—and so many others’—on pause. Receiving legal status, of course, would not inoculate AAPI immigrants against discrimination. That work will have to be done closer to home.

*Disclaimer: Please note that pseudonyms have been used to protect the identity of CBJC program recipients and to preserve attorney-client confidentiality.