As many of NELP’s success stories come to show, the spirit of micro-entrepreneurship is largely driven by the ability to build relationships between both like-minded and diverse people.

For Qiana Martin, founder and owner of EAT SOCCER, fostering a community of passionate individuals has always been the name of the game. Her soccer lifestyle company is today an expanding enterprise that connects people who share a deep-seated love for the sport of soccer. A professional soccer player turned social entrepreneur, Qiana reflects the power of small-business creativity and its potential to cultivate unique, dynamic and lasting communities. 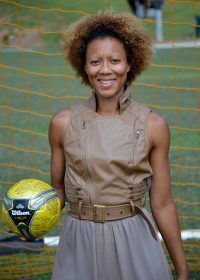 Qiana’s relationship with soccer evolved through a nontraditional path. While living in Los Angeles, she began familiarizing herself with the sport as a street match pick-up player.  Her love of the sport grew, and through an unexpected turn of events, she received an opportunity to train and play with a women’s club in Brazil. It was during this time that she came to understand the universality of the language of sports and its potential to produce organic and fulfilling encounters between individuals who would otherwise be limited in their interactions with one-another.

After returning to the United States, Qiana noticed that there was an untapped market for people who ‘live and breathe’ soccer in the US. She thus came up with the idea for EAT SOCCER, a consumer-based business for soccer enthusiasts that provides entertaining digital content, insightful data and engaging experiences for millions of soccer fans in the US. Shortly after reaching out to NELP with her business plan in 2016, Qiana was placed with a team of attorneys from Latham & Watkins LLP who helped her create a business entity and assisted with drafting business agreements for EAT SOCCER.

Today, three years after taking the initial steps which gave life to an idea, Qiana has successfully developed an expanding network for soccer enthusiasts from all over the world. The company’s website, eatsoccer.com, serves as a platform for consumers to read and share stories about their relationship to the sport. Moreover, consistent with the mission to build unique and meaningful relationships, EAT SOCCER distinguishes itself through its ever-growing partnerships with sport brands, football clubs, and socially-oriented foundations. For example, Qiana recently helped organize the ‘Chelsea Culture Club’, a brunch in honor of the Chelsea F.C. vs Liverpool match on September 22, 2019. The event was hosted under the banner of the ‘Red Card for Hate Initiative’, an alliance between the World Jewish Congress and the Chelsea Football Club which “harnesses the spirit of sports in order to build bridges between people of different religious, ethnic, and national backgrounds.”[1]

Qiana’s ability to build and sustain partnerships has also allowed her to develop a continuous relationship with the team of volunteer attorneys that NELP helped her connect to back in 2016. To this day, Qiana “continues to reach out to her legal team at Latham & Watkins LLP to invite them to EAT SOCCER sponsored events.” In exercising this spirit of continual collaboration, EAT SOCCER serves as a poignant example of micro-entrepreneurship’s community-building potential, whereby citizens from varied backgrounds and cultures can come together through a common embrace of and passion for “the universal language of soccer”.