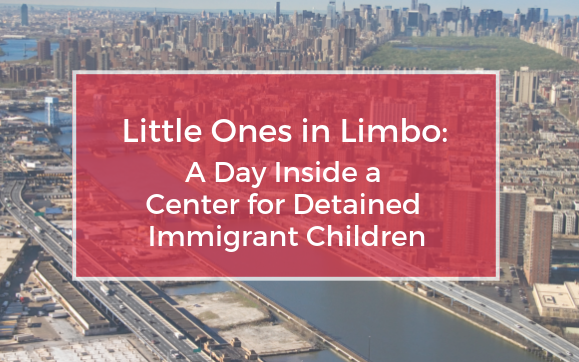 Little Ones in Limbo: A Day Inside a Center for Detained Immigrant Children

This summer, Peter Schey, one of the lead litigators of the 1997 Flores v. Reno settlement agreement and current President and Executive Director of the Center for Human Rights and Constitutional Law marshaled immigrant advocates across the country to ensure that the constitutional rights of immigrant children were being upheld. The Flores settlement stipulates country-wide standards concerning the treatment of detained immigrant children and the conditions of their release. Within days of Mr. Schey’s message, hundreds of lawyers, interpreters, mental health professionals, and concerned citizens enrolled to visit sites in border towns and metropolitan areas alike. Volunteers enlisted to inspect the over 60 facilities where thousands of immigrant minors are detained and to interview detained children to establish that such arrangements were in conformity with Flores. As the Project Coordinator for the City Bar Justice Center’s Immigrant Justice Project’s Asylum Unit and a child of immigrants, I found it imperative to join other advocates to safeguard the rights of immigrant youth.

Unlike in other states, the Office of Refugee Resettlement (ORR) placed hundreds of migrant minors into foster care in New York in lieu of detention centers. The ORR is also the government agency responsible for reuniting children with parents and guardians. For many reasons including adherence to the Flores settlement, ORR contracted Cayuga Centers, federally funded facilities tasked with caring for migrant children, to provide day programs that offer educational programming, mental health services, phone communication with a parent or guardian, and to spearhead arrangements to reunite with their families.

I was part of a New York City team of nine volunteers that had an opportunity to tour a Cayuga Center in East Harlem to ensure that the facility space reserved for and programming offered to immigrant youth was up to Flores standards. We also spoke with children to learn more about their mental, physical, and emotional well-being and to ensure that they had open access to medical treatment at the Center and at their foster homes. Our particular volunteer group had a challenging start to our assignment. We received the address of the site location only an hour before our site visit was set to begin. Our group was told that the breakdown in communication was due to the slow pace of government clearances and bureaucracy. After our small group arrived at the address initially provided to us, we were informed that we had mistakenly been given the wrong location and we were transported in minivans to another location across Manhattan. Senior staff members at the Cayuga Center were apologetic for the delay and miscommunication. Our group met with various staff: an Office of Refugee Resettlement liaison, teachers, directors, and caretakers. We were escorted around the facility and shown “classrooms”, which were more akin to partially walled off areas with a television, long tables and seats for small children. Teachers at Cayuga Centers are not required to be state certified but instead receive a 1 week long training which includes a day of modules regarding working with unaccompanied, immigrant children. Educators are responsible for teaching 20-40 children at any given time. During our tour and an impromptu Q&A segment, we learned about the facility’s intake process, educational programming, and various policies. Cayuga Centers have about 650 children under the age of 17 enrolled in their day programs. All children they oversee are mandated to report to the centers for about 12 hours a day.

In addition to touring the facility, I served as an interpreter and interviewed immigrant children who had either entered the country alone or had been separated from family at the border. One of our team’s objectives was to write declarations for children who had been in ORR custody for over 20 days–the maximum time allowed under the Flores settlement. One particular child we interviewed, Jacob*, had been in ORR custody for over five months. He resided with a foster family in the Bronx along with four other immigrant children awaiting family reunification. Jacob’s parents had immigrated to the United States when Jacob was a toddler and left him in the custody of a family friend. Jacob experienced emotional, physical, and verbal mistreatment at the hands of his caretaker in his country and came to the U.S. to be reunited with his parents. Jacob spoke of his parents with tears in his eyes. He expected to be reunited with them within a few days of entering the country, at most. Five months later, Jacob is still in foster care more than 3,000 miles away from his parents. He is only allowed to speak to his parents for 10 minutes once a week since the sudden influx of children at Cayuga Centers has caused staff to reduce the frequency of calls children can make to their parents or guardians. The last time Jacob spoke to his parents they were also frustrated with the delays in reuniting with their son. His parents had complied with ORR’s background requests and undergone home visits several weeks prior yet still had not received more information regarding when their son was coming home.

Visiting the Cayuga Center in New York City was a sobering experience. Most of the children at the East Harlem Cayuga Centers location were under the age of 8, despite at least one federal district court ordering the government to reunite detained minors under the age of 5 with their families within 14 days and older children within 30 days. Working with a much younger population proved challenging as it is a heavy ask to expect a 6-year-old to articulate how they are being treated and why they believe they have not been reunited with their family. At its core, the facility visit and interviews highlighted that in this ever-increasingly hostile immigration landscape the most vulnerable members of an already vulnerable group are in the cross-hairs of a political agenda at the price of their well-being. Immigrants fleeing from harm in their countries have been ensnared in a relentlessly punitive system and now more than ever advocates need to galvanize to protect basic human rights.

* Names have been changed