On October 26, 2021, the City Bar Justice Center commemorated the tremendous support of eleven volunteers, who were awarded with a 2021 Outstanding Pro Bono Service Award, for their remarkable commitment to our clients and for championing our team’s mission to advance access to justice. Congratulations! 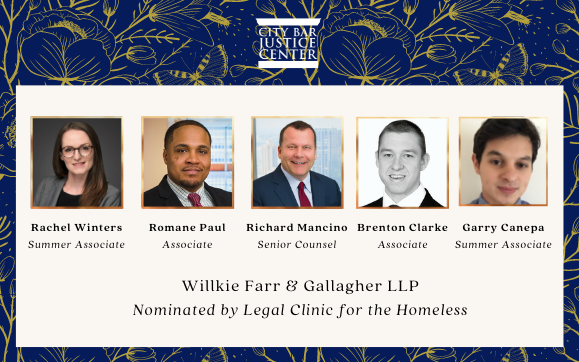 The Legal Clinic for the Homeless provides advice, advocacy and representation to residents of homeless shelters on a variety of matters related to public benefits, shelter placement, as well as other issues. It also engages in advocacy campaigns to achieve systemic change.

The pandemic has imposed deeply challenging burdens on all of us, but thousands of New Yorkers unable to pay monthly self-storage facility fees due to financial difficulties caused by the pandemic also faced the loss of deeply valued personal possessions to auction for failure to address storage facility arrears.  As the City Bar Justice Center grappled with the prospect of  a large looming  storage auction wave , Willkie Farr & Gallagher stepped up without hesitation to prepare a memo addressing New York law governing self-storage sales, the uncertain State response on providing relief to self-storage occupants, and arguments for extending the broader pandemic evictions moratorium to self-storage occupants.  Publication of the Willkie self-storage memo, researched and written by attorneys Richard Mancino, Romane Paul, Brenton Clark, and summer associates Garry Canepa and Rachel Winters, helped raise awareness of the issue, received press coverage, and – we believe – helped spur on state legislators to introduce the Pandemic Self-Storage Act. While, like many initial attempts at reform, the bill did not immediately gain traction, its introduction was followed by self-storage industry officials urging facility managers and customers to work together on payment plans, rent deferrals, and rent abatements to try to avert storage auctions.

After the publication of the memo and press coverage on self-storage sales, a man whose precious family possessions in storage – including heirlooms, personal records, and much more – had been auctioned or disposed of with woefully insufficient notice, reached out to the Legal Clinic for the Homeless.  We approached the Willkie team about this case, and without hesitation, Willkie lawyers Rich Mancino, Romane Paul, and Brenton Clarke accepted our referral and have worked resolutely for their client, showing compassion for his situation and clear-mindedness about obstacles he faces as they assess a range of demand, negotiation, and litigation options that might help their client secure some compensation for his deep losses.

The Willkie team’s research and memorandum were of exceptional quality and inspired legislation.  Their client, homeless and without funds, would have little chance of redress against the storage facility without the firm’s representation.

Congratulations! We applaud the Willkie team for their great work and shining example!