On October 26, 2020, the City Bar Justice Center commemorated the tremendous response of ten volunteer attorneys who rose to meet the challenges of 2020, awarding each of them with a 2020 Outstanding Pro Bono Service Award. Our honorees demonstrated an unwavering commitment to supporting disadvantaged New Yorkers, particularly in times of crisis. Congratulations! 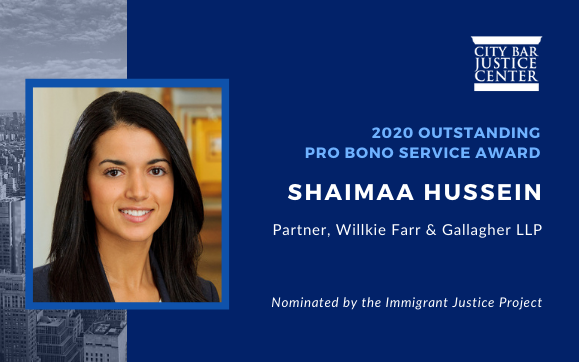 The Immigrant Justice Project (IJP) assists asylum seekers fleeing persecution in their home countries, survivors of violent crimes and trafficking in the United States, and individuals seeking humanitarian protection and other forms of immigration relief.

During a time when immigrants and refugees face unprecedented attacks, Shaimaa Hussein, a partner at Willkie Farr & Gallagher LLP, has long fought to uphold their human rights and the rule of law. A Project volunteer since 2016, Ms. Hussein has represented a varied cross section of individuals who have faced persecution because of who they are, what they believe or who they love, including a transgender woman from Peru and gay asylum seekers from Algeria and Jamaica. She has also represented immigrant women on cases involving domestic violence.

As if that were not enough, in recent months, as the Administration attempted to re-write asylum law by executive fiat and published a cascade of proposed regulatory rules that would eviscerate the rights of asylum seekers, in partnership with our Project, Ms. Hussein spearheaded publishing consecutive Comments in opposition to these attempts to overturn settled precedent and long-established asylum procedures. Her willingness to undertake this work, amid a global pandemic no less, speaks volumes about her heart, her leadership and her commitment to immigrant rights.

It is therefore with great pleasure that we present Shaimaa Hussein with a 2020 Outstanding Pro Bono Service Award.