On October 25, 2022, the City Bar Justice Center commemorated the tremendous support of eleven volunteers, who were awarded with a 2022 Outstanding Pro Bono Service Award, for their remarkable commitment to our clients and for championing our team’s mission to advance access to justice. Congratulations! 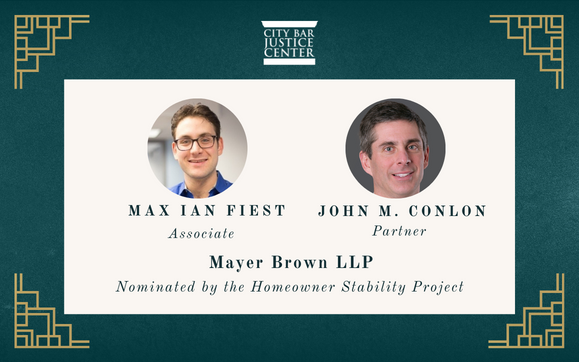 The Homeowner Stability Project (HSP) provides legal assistance to New York City homeowners of modest means threatened with the loss of their home.

As part of the firm’s Project Equity Task Force, Mayer Brown LLP has partnered with the Justice Center’s Homeowner Stability Project to address systemic racial inequity in the ownership of residential properties.

Partner John Conlon and Associate Max Ian Feist of Mayer Brown LLP have engaged in complex litigation involving a predatory partition of heirs property – predatory because, among other things, such actions often target homes in historically Black neighborhoods with few legal resources. John and Max are currently representing a client seeking to protect her family home once owned by her grandmother. The grandmother had died intestate with two heirs. The client’s mother (now deceased) resided in the property since it was purchased and had exclusive control until the grandmother’s passing. The other heir (also deceased) did not. After a speculator approached and purchased a fractional interest in the property from the client’s distant relatives for a fraction of its true value, the investor commenced a partition action in a bid to acquire the entirety of the home at a steep discount, develop it, and strip the accumulated wealth that the family had built over generations.

This case involves very complex litigation and came to HSP with the prior counsel having already started negotiations that would have allowed the speculator to walk away with hundreds of thousands of dollars of this family’s wealth. John and Max, however, have engaged in significant discovery and motion practice to establish and prove the client’s claims and defenses. They have spent hours investigating and litigating claims and have obtained some significant procedural wins for the client. Because of John’s and Max’s fierce advocacy, our client has the chance to protect the significant intergenerational wealth held in her family home,

We applaud John and Max for their excellent legal advocacy, and commitment to racial and social justice.