Pro Bono FEMA Appeals Clinics for the 2017 hurricane season kicked off last night at the New York City Bar Association with three pro bono attorneys and three clients with support from the City Bar Justice Center. The clinics are made possible by the collaborative efforts of the City Bar, the Association of Pro Bono Counsel, and members of the new Task Force on Disaster Relief launched by New York’s Chief Judge Janet DiFiore.  As City Bar President John Kiernan described in his December 11 statement on disaster relief, “Veterans of providing disaster legal services knew from the outset that given the scale of the hurricanes’ effects, the need for assistance from volunteer lawyers would certainly ripen and crystallize once the immediate humanitarian crisis advanced to the next recovery stage.” Indeed, FEMA reported receiving over 4.5 million benefits applications from storm victims, and the call for pro bono lawyers became clear when FEMA began issuing denials in mid-November.

At last night’s clinic, one of the clients had been evacuated from Puerto Rico. Living in a shelter, the client was denied FEMA assistance because the client had not applied first for a Small Business Administration (SBA) loan. The pro bono team called FEMA on a cell phone and engaged in advocacy, filed an online SBA loan application which was immediately rejected, and called FEMA back to pursue his application for relief. Luckily, FEMA’s phone line is open until 10 p.m. 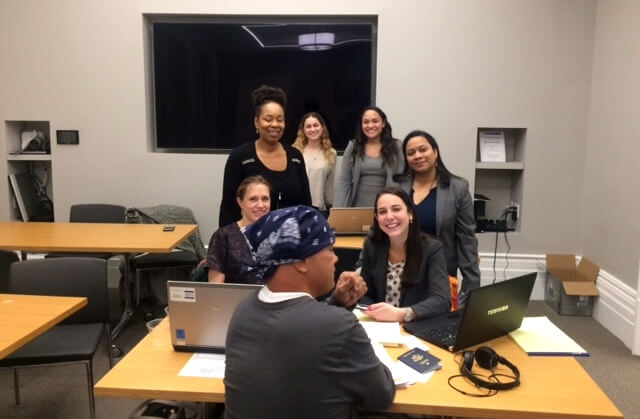 The second client was a mom with two special needs children who is in the midst of a divorce. She is housed and the kids are in school but missing many items from the hurricane. FEMA granted approximately two thousand dollars to repair her home but she needs to appeal, and will return to the clinic next month.

Attorneys were able to help a third client at the clinic – a Superstorm Sandy victim who is still undergoing home repairs. He noticed the FEMA Appeals sign and walked over from the City Bar’s Monday Night Law clinic. This instance of a Sandy homeowner in need of free legal counsel illustrates how years later, New Yorkers are still dealing with home repairs from Sandy and the Build it Back Program.

The next FEMA Appeals clinic is December 18 from 6 – 8 p.m. and they will pick up again on January 8. Please email Erika Lawrenson if you would like to volunteer to make the holidays a little brighter for hurricane victims in New York. Pro bono legal help makes an extraordinary difference for families in crises.