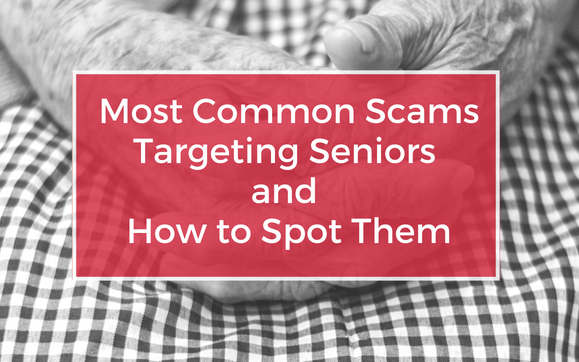 Most Common Scams Targeting Seniors and How to Spot Them

It happens far too often; senior citizens find themselves struggling to recover after being scammed. In addition to the financial loss, many victims feel shame and embarrassment at having been fooled. This causes many to keep the incident shrouded in secrecy from their closest friends and family. In commemoration of World Elder Abuse Awareness Day, the Elderlaw Project has summarized potential scams targeting seniors that you should look out for in order to protect your income and savings.

A national study conducted by the Metlife Mature Market Institute indicates that over 1 million Americans aged 65 and older suffer over 2.9 billion in losses attributed to financial abuse and scams. Similarly, the National Council on Aging estimates that nearly one in 10 Americans above the age of 60 experience some form of financial elder abuse, and the vast majority of those cases go unreported. 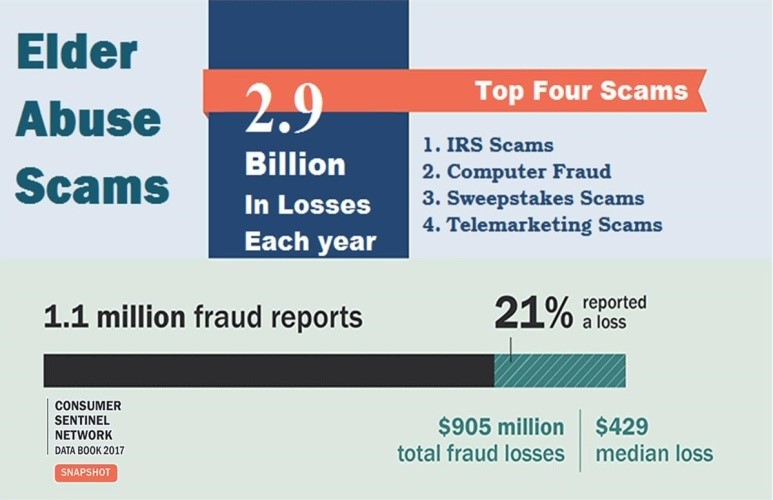 IRS impersonation fraud was listed as the number one scam targeting senior citizens by the U.S. Special Committee on Aging in 2017. Over 1.87 million Americans were targeted by people representing themselves as IRS officials last year.

IRS impersonators frequently call seniors and accuse them of owing back taxes and penalties. They threaten them with home foreclosure, arrest or garnishment of social security unless they pay the “debt” immediately. They rely on the fact that many people are unaware that the IRS never makes unsolicited calls. In response to the upswing in fake IRS callers, the IRS released guidelines to assist taxpayers in identifying and avoiding fraudulent IRS scams.

Tip: The IRS will never ask you for personal information such as social security or bank account numbers. They will never demand immediate payment over the phone. If you receive an unexpected call from someone claiming to be from the IRS, hang up.

One of the most common scams targeting seniors is telephone calls from scammers. These fraudsters claim to be a technology specialist from a major corporation such as Microsoft, Apple, or Google. Often, the scammer convinces the victim that their software has a virus and that the only solution is to give the scammer complete remote access to their computer. Adding salt to the wound, many scammers ask for credit card or bank account information in payment for their “help”. So, the victim pays for the privilege of having their computer hacked.

Tip: Never give your financial information to anyone who calls unexpectedly and claims to be working for Microsoft, Apple, Google or other major technology company. Always be aware of what website you are logging into and double check to make sure the website has the word “secure” next to the address bar.

Senior citizens are particularly vulnerable to sweepstakes scams, which trick victims into believing they have won a major prize, according to a recent report by the Better Business Bureau. Reported losses exceeded $107 million in 2017.

Scammers will claim to be calling from a reputable sweepstakes company (like Publishers Clearing House or Mega Millions) with news of a big win. To claim their prize, all the “winner” has to do is pay a “fee”. Unwary victims send money to the scammer and receive nothing in return. If you send money, the scammers will continue to demand more, promising each time that you will soon receive the winnings.

Tip: If something sounds too good to be true, it most likely is!  Don’t send money to unknown callers or respond to sweepstakes letters in the mail.  You will be giving your money away to fraudsters.

Seniors purchase significantly more products by phone compared to younger age groups. This causes them to fall prey to telemarketing scams at a higher rate. As a result, they are targeted by fake charities or fake relatives who claim to be in trouble and in need of financial assistance. Scammers can take advantage of seniors by selling fake products and using the financial information provided to make fraudulent purchases.

Tip: Before making purchases by phone, verify that the caller is who they say they are. Never buy from an unfamiliar company or from someone you don’t know (“cold callers”).

If you or someone you know has been the victim of elder fraud, it is important to file a police report with your local police department.  Also, it is also a good idea to go over credit card and bank statements to check for suspicious activity. In addition, you can prevent further harm by alerting credit card companies or financial institutions of signs of fraud. Make family and friends aware of these scams.

Remember, staying educated and informed is the best way to protect against elder fraud and financial abuse.