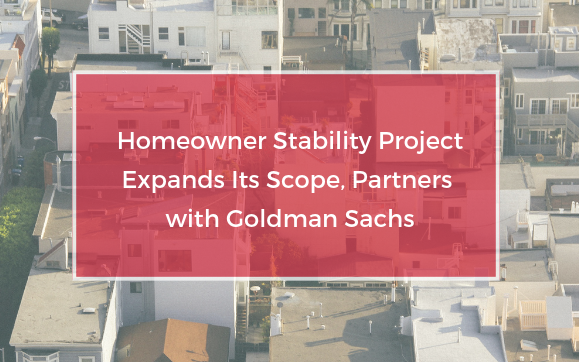 One topic sure to engage New Yorkers is housing.

We swap stories about the one that got away, what we’ll sacrifice for this or that convenience, and, of course, the exorbitant cost of living in this place we love to call home.

The City Bar Justice Center (“CBJC”) also focuses on housing costs as we provide first-rate legal services to approximately 26,000 low-income and other vulnerable New Yorkers each year. Our Legal Clinic for the Homeless enlists pro bono attorneys to help the record numbers of homeless families sleeping in City shelters each night, so we see firsthand the consequences of losing a home. And with all of our pro bono work, we try to stay ahead of trends. Case in point: a recently reformatted CBJC practice area – the Homeowner Stability Project – and its launch of an LGBTQ-focused day of service in partnership with Goldman Sachs. The case also illustrates the unique dynamism that corporate legal groups increasingly bring to pro bono advocacy.

State government and regulatory agencies funded legal services organizations like CBJC to assist those at risk of losing their homes following the 2008 financial crisis. Since that time, CBJC’s Foreclosure Project has assisted over 1,000 New Yorkers in various stages of foreclosure and has worked in recent years in partnership with the Center for New York City Neighborhoods. Unlike most CBJC practices, however, the Foreclosure Project never had significant pro bono involvement by large law firms or corporate legal departments, largely owing to conflict-of-interest concerns rooted in financial industry-related work.

More recently, the attorney directing CBJC’s Foreclosure Project, Scott Kohanowski, noticed diversifying trends in homeowner vulnerability – e.g., increasing predatory financing schemes and forced partition sales, especially in minority neighborhoods with rising home values; harassment of LGBTQ homeowners, often linked with attempts to force them from valuable properties at below-market rates; and complex struggles that senior homeowners and their families face in staying on top of property tax and other housing expenses while living on a modest fixed income, or in transferring (so as to preserve) ownership to the next generation as an elder reaches life’s end. In all such instances, low-income or otherwise vulnerable New Yorkers with a co-op, condo, or other home that is often their sole asset of any financial significance face housing insecurity.

CBJC’s rebranded Homeowner Stability Project seeks to address these complex challenges and ensure that such individuals or families stay in their homes whenever possible – thereby also preserving New York’s distinctly vibrant social fabric. This summer, CBJC joined forces with a robust financial advisory and legal team from Goldman Sachs to host a first-ever Homeowner Stability Clinic focused on LGBTQ Seniors during Pride Month that began with a panel on budgeting, financial and life planning, estate issues, foreclosure prevention, and other useful information.

Attendees then benefited from in-person legal and financial assessments that identified existing or potential risks to their home ownership, addressed legal questions, and offered an opportunity to prepare critical documents such as healthcare proxies and powers of attorney.

The successful clinic confirmed the value of the rebranded CBJC project’s focus on broader emerging risks to homeowner stability among low-income and other vulnerable communities. And in leveraging the Goldman Sachs team’s world-class financial and legal expertise, it also pointed to the unique strengths that corporate pro bono partners can bring to our work. Further, in focusing a day of service on a community with its own unique risks – in the case of LGBTQ New York seniors, risks such as identity-based isolation, depressed income owing to historical discrimination, family estrangement, or residual stigma associated with being out or living with HIV or AIDS – pro bono volunteers met several core objectives of the New York State CLE Board’s new diversity, inclusion, and elimination of bias CLE requirement (see 22 NYCRR 1500.2). Effective July 1 of this year, the requirement calls on us to think critically as a legal community about issues pertaining to implicit and explicit bias, equal access to justice, and service to a diverse population.

By serving well over a dozen senior and other vulnerable LGBTQ New Yorkers through the Pride Month Homeowner Stability Clinic, CBJC and Goldman Sachs took a significant stand for equality, and for the value that each of us attaches to being at home in New York.

The City Bar Justice Center’s Homeowner Stability Project provides legal assistance to low and moderate-income homeowners facing foreclosure. Our goal is to keep people in their homes whenever possible. We recruit and train volunteer lawyers, primarily to negotiate workout arrangements with lenders and attend settlement conferences. Occasionally, where appropriate, volunteers may represent the homeowner in litigation.