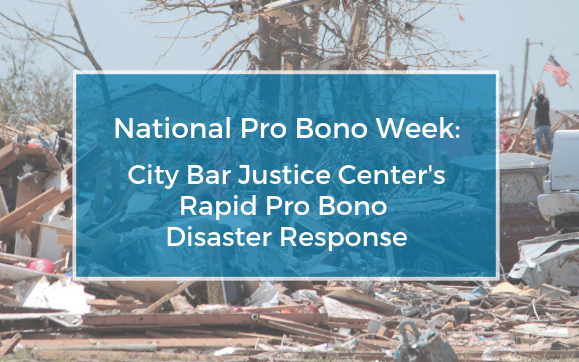 The City Bar Justice Center’s skill in mobilizing the legal community to respond to unmet legal needs has been tapped over and over again when there is a disaster. This has been exemplified by the large scale pro bono staffed legal clinics that the Justice Center organized following September 11th, Hurricane Katrina, the earthquakes in Haiti and Nepal, the Ebola epidemic in West Africa, Superstorm Sandy, and recently Hurricane Maria.

Since 9/11, when the line of attorneys who wanted to volunteer to help victims’ families stretched around the corner from the entrance to the New York City Bar on 44th Street, the City Bar Justice Center has been the hub for pro bono assistance in a disaster – organizing trainings, scheduling staffing of help desks, and matching victims with pro bono attorneys for one-on-one full representation and also matching larger projects such as resource booklets. Since then, when a crisis arises, attorneys from the City’s firms and corporate legal departments, as well as the courts and law schools, contact the Justice Center to find out how they can be of help and where they can donate. The year following 9/11, the Justice Center served as coordinator of the Special Registration Representation Project, providing legal advice and, when necessary, full representation, to those noncitizen males from 25 mostly Arab and Muslim countries who were required to register with immigration authorities pursuant to the National Security Entry-Exit Registration System, known as NSEERS, which was established after the September 11th attacks.  The Justice Center hosted trainings on immigration law, organized clinics in Muslim communities, and then connected cases referred from the clinics to pro bono attorneys and legal services organizations with expertise in immigration law.

When Superstorm Sandy hit, the Justice Center, whose offices were not directly affected by the storm, was able to quickly launch a response to Sandy, a response that continued for an extended period of time, as the need for legal assistance extended well beyond the onset of the storm. The Justice Center trained and mobilized pro bono lawyers to staff clinics at two sites in the Rockaways.  Amidst rubble and originally sitting outdoors at folding tables, thirty pro bono attorneys gave brief advice out in the field to 59 clients regarding disaster unemployment assistance and disaster food stamps, insurance claims, lack of repairs, and landlord tenant issues involving no electricity, heat, or hot water.  The Justice Center also worked with NYSBA, the ABA Young Lawyers Committee, and New York City to gain access to the FEMA Centers and, when access was gained, the Justice Center took on the role of coordinating the staffing and schedules for legal clinics that were held in the FEMA Centers in all the boroughs.

For natural disasters that occur elsewhere, the City Bar Justice Center also has mobilized lawyers to provide assistance. In 2005, the Justice Center conducted outreach in English, Spanish, French, and Vietnamese to those who had been displaced by Hurricane Katrina and trained pro bono attorneys who staffed the Justice Center’s Legal Hotline, providing free legal information and referrals related to benefits and assistance for evacuees.  In 2017, in the aftermath of Hurricane Maria, the Justice Center collaborated with NYLAG, The Legal Aid Society, Legal Services NYC, the Chief Judge’s Hurricane Task Force, FEMA and NYC’s Civil Justice Coordinator to organize a FEMA appeals training for 157 volunteer attorneys who, under the supervision of Justice Center attorneys, staffed four legal clinics for victims of Hurricane Maria who had relocated to New York City.

In addition, the Justice Center’s Immigrant Justice Project (IJP) has always been quick to coordinate and conduct trainings and legal clinics for people seeking Temporary Protected Status (TPS), a temporary status given to eligible nationals in the US who are from countries that have been designated as unsafe for return as a result of an environmental disaster or ongoing civil unrest.  Over the past eight years, IJP has organized and held legal clinics for people seeking Temporary Protection Status (TPS) after the 2010 earthquake in Haiti and during the 2015 Ebola epidemic in West Africa, and for people from Nepal who, last June 2018, were seeking to re-register for renewed TPS that had been granted after a 2015 earthquake.

As the actions and policies coming out of the current White House continue to create a climate of fear and uncertainty about the future for immigrants and their families, the work of IJP has intensified.  In response to the federal administration’s increase in arrests and deportations of undocumented immigrants, including those with no criminal history, its attempts to end DACA, which is alive only as the result of successful lawsuits challenging the administration’s action, and its policies regarding zero tolerance border migration and separation of children from their parents upon crossing the southern border, IJP has expanded its activities, increased the number of legal clinics and presentations that it conducts, and sent staff to the border to help with screening of asylum applicants.

In New York City, IJP has trained volunteer attorneys and held legal clinics for those seeking Family Emergency Preparedness, a simple but necessary way to plan for the future in the event that the non-citizen parent is detained or deported, and for screening DACA and TPS recipients for other, more long-term immigration relief.  Also, IJP staff traveled to Albany this year to work in legal clinics assisting detained immigrants shipped up from the border seeking asylum.

Given the increasing pace of disasters, the persistent issues for the pro bono community are 1) how best to organize and mobilize volunteers so that these important resources can be used most efficiently and 2) what new technology can be effectively used to address the needs of a disaster. In connection with the first issue, we are pleased to report that the Pro Bono and Legal Services Committee of the City Bar has recently issued a Rapid Response Manual which is a guide for helping organizations prepare in advance for disasters that trigger a need for a rapid and efficient pro bono legal response. The Manual also has great suggestions for using technology to coordinate the work of volunteers more efficiently  In addition, the City Bar Justice Center drafted a form FEMA appeal after Superstorm Sandy when we realized we could not individually represent each potential appellant.  We partnered with ProBono.Net to make it a fillable form which is now available nationally on the Disaster.org website which itself is supported by a Legal Services Corporation technology grant.  This approach of shared innovations holds great promise for the future of disaster relief.

This October, the City Bar Justice Center joins the national legal community in celebrating Pro Bono Week. Keeping in mind this year’s theme of disaster resiliency, we thank all of the selfless attorneys who show up to help during the darkest times. We hope that the new Rapid Response Manual will help us to efficiently organize resources after the next disaster, manage volunteer expectations of wanting to immediately “do something” and keep the focus on the longer term legal needs so that more people can be helped with important pro bono services to meet their pressing needs.  This year’s pro bono celebration is a tribute to the generous spirit that has always animated New York’s pro bono legal community.