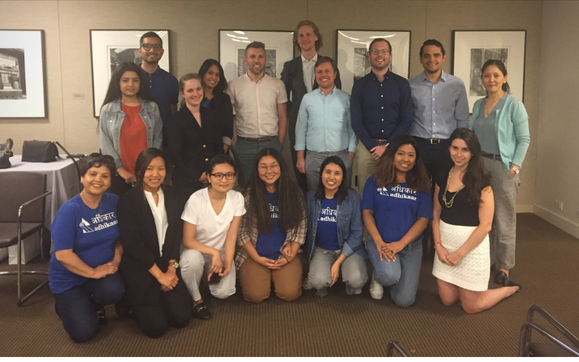 Temporary Protected Status for Nepal was first announced in June 2015, soon after Nepal was struck by a devastating series of earthquakes in April 2015. This humanitarian form of relief allowed Nepali nationals who were already in the U.S. when the program was announced to remain and work in the United States while conditions in their home country are unsafe. The Secretary of Homeland Security Kirstjen Nielsen announced that Nepal TPS would be terminated in April 2018, but delayed the termination for 12 months to allow individuals time to organize their affairs. Nepal TPS will end on June 24, 2019. The re-registration period is currently open and will end in July. Individuals who re-register are eligible to maintain their status and accompanying work authorization through June 24, 2019. Clinics to help screen individuals for other, longer-term immigration relief are currently being planned.

The collaboration with Adhikaar has deep roots. After Nepal TPS was first announced in 2015, CBJC worked with Adhikaar to conduct TPS screenings and application assistance clinics. CBJC ultimately organized four clinics and helped 65 individual apply for TPS. The Justice Center has a long track record in organizing large-scale legal clinics in response to emerging needs and crises, including Special Registration following 9/11, Deferred Action for Childhood Arrivals (DACA), Hurricane Sandy, and Haitian TPS. Previously, the Justice Center mobilized volunteer attorneys following the TPS designation for Liberia, Sierra Leone, and Guinea in the wake of the Ebola outbreak there.

Need civil legal help but unable to pay for a lawyer? We’re here.