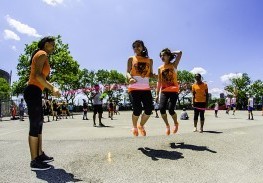 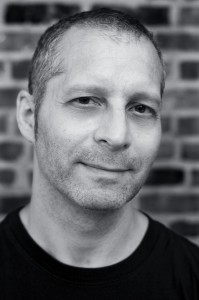 In 2008, fitness instructor and entrepreneur Tim Haft approached  the City Bar Justice Center’s Neighborhood Entrepreneur Law Project (NELP) seeking legal assistance. Four years prior, he had founded Punk Rope, a fitness company best known for its fitness class of the same name, which combined intense cardio with a fun and playful attitude. Having grown up in New York City, Haft was familiar with the endless fitness options available to the average New Yorker but found that nobody was doing what he wanted to do–have fun while working out in a carefree environment for adults, “kind of like recess.”

Haft’s rope-jumping based fitness class focused on increasing strength, stamina, and coordination. After hearing a lot of no’s from potential venues, he found allies in community centers such as the YMCA and JCC that were willing to give his idea a shot. Within four years, he got Punk Rope off the ground with consistent weekly classes across the city as well as certification workshops throughout the U.S. As his business expanded, Haft knew he needed to craft some sort of plan in order to protect his innovative intellectual property. 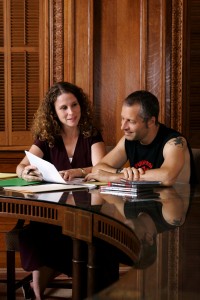 Despite growing interest in Punk Rope from major fitness chains and some exciting media attention, Haft’s business was not profitable enough to afford private counsel. At the recommendation of a friend, he reached out to NELP for assistance.

NELP connected Haft with volunteer attorney Randi Kassover of Merrill Lynch, who reviewed contracts for Punk Rope to use with its instructors and facilities. Kassover also assisted with licensing issues for a fitness DVD Haft was in the process of creating. She helped him license music from bands for the DVD and crafted a disclaimer for its opening credits.

As Punk Rope celebrated its fifth anniversary in 2009, fitness trainers in Europe reached out to Haft with interest in becoming Punk Rope-certified so they could teach their own Punk Rope classes across the pond. Given the hands-on manner of operating his business, Haft was initially reluctant to launch a distance certification program. When he decided to proceed, NELP connected Haft with two solo practitioners, Irena Mykyta and David Leyden, who helped him navigate the international market. They created a contract for him to use with overseas fitness instructors interested in licensing the Punk Rope concept. The first overseas instructor to become certified was in the Netherlands. Since then, Punk Rope has certified instructors in England, Canada, and New Zealand.

On the role NELP played in his business development, Haft says, “NELP’s volunteers are really motivated, knowledgeable, and willing to share their expertise and make time. To this day, all these years later, the foundation that they laid was really significant and so important for a young business. If your foundation is weak, there are going to be cracks down the road and you’ll have to backpedal to figure things out.” 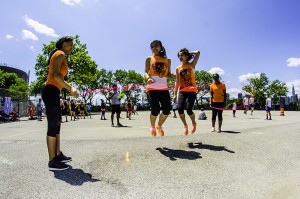 Punk Rope classes are now offered across the country in California, Maine, Massachusetts, Missouri, New Jersey, and New York, as well as abroad. Punk Rope has been featured on national television in the United Kingdom and in a variety of major publications within the U.S. In 2013, Punk Rope was invited to present a workshop at the Rock and Roll Hall of Fame’s prestigious Summer Teacher Institute. Punk Rope’s Rope Jumping for Maximum Fitness DVD has sold more than 1,000 copies. To find a Punk Rope class near you, visit http://punkrope.com.